Claire has been learning to ride a bike for about 4 years now.  Or at least, we have been trying to get her to ride for that long, and she reluctantly tries for a while until we run out of time or she outgrows her bike.  We have asked various nannies to give it a try over the summers, with no luck.  We’re making one more push this summer on Claire’s bike #3.

So on Sunday morning, we hit the track at the local middle school where everyone around here goes to learn to ride a bike.  I had gotten Claire a new (used) bike that actually fits her current size, and she was at least willing to give it a spin.  No training wheels any more for Claire; they just don’t make them for her size bike.

It turns out that riding a bike and teaching someone to ride a bike are very different skills, and you don’t automatically know how to teach someone to ride a bike when you become a dad.  Strange, right?  I figured we’d just go for a modest victory, at least some small progress.  So I ran along with Claire and held her bike steady by the seat as she peddled along the flat sidewalk.  I told to peddle faster since it’s easier to balance that way.  We got up to a good speed, and then I let go for a couple of seconds without telling her.  Then I caught on to her seat again before she had crashed and told her she had done it: she had balanced on her own for two seconds!  Claire was very proud.  We did it again, and she asked me not to tell her when I was letting go so she didn’t get nervous.  She did three seconds this time before she started to wobble, and I caught her seat again.  The last thing we needed right now was a bloody knee or broken arm, so we called it good there for now.

Meanwhile, poor Molly was trying out her inherited little bike with the training wheels.  She asked us not to tell anyone that her bike had training wheels so they would still think she was cool.  I don’t think the two joggers and one dog walker nearby thought any less of her for her training wheels, but we did not mention it to them to honor Molly’s wishes.

While I was running with Claire, Molly managed to crash her bike on the grass.  But she was unscathed, slightly amused, and ready to keep going.  I had her pose for a picture (above).  Then Molly got to ride around the 1/4 mile jogging track once with her little bike.  Molly enjoyed riding her bike more than Claire did.  With her attitude, she might learn to ride on her own before her older sister.  A little sibling rivalry might spark Claire’s interest in biking?

But Claire is making progress with her three seconds of self-powered riding and should be proud for just getting out there and trying it.

We made a quick trip to Houston this weekend to see my Dad for his birthday.  Kit stayed home to study for some big doctor test coming up in August.  We were in Houston for one full day and a morning.

Highlights included ice skating at Memorial City Mall, Molly’s first time to skate.  It took about 30 minutes for Molly to make her way around the edge of the skating rink while she held to the side on for dear life.  On Claire’s turn, she didn’t fare much better.  Both girls really liked the American Girl store across the hall from the skating rink.

We had chocolate pie and James Coney Island for my dad’s birthday.  He and my mom went to the Astro’s game while the girls and I headed back to Austin.

Before we left, I managed to do a quick baseball home run session with Eric in the blazing sun at our old junior high.  Eric’s five-year-old son, Luke, took a few solid swings but didn’t connect for a homer.  When Eric and I were batting, Luke was in the dugout, safe from the flying hardballs.  But we did have a couple of game delays when Luke yelled “Firefly!” and ran out into the field to chase a firefly.  What a great little kid moment, even if it was someone else’s little kid. 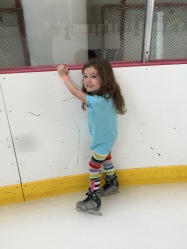 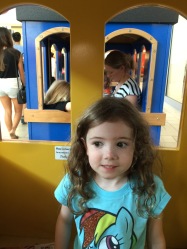 “Is she another one of Mom’s friends?”

That was Molly’s question about the babysitter scheduled for tomorrow.

With our summer nanny, Anna, out sick or on vacation for most of this week, we’ve had to hire random backup sitters from a service.  This was our fouth different sitter in as many days.

Molly’s question puzzled us all for a minute.  Why would Molly think all of these sitters were Kit’s friends?

Then Kit figured it out.  Mom’s Best Friend is the sitter service that we have been using to get quick sitters like this.  Molly heard us saying something like a “A Mom’s Best Friend sitter is coming tomorrow” and came to the very reasonable conclusion that all these sitters were her Mom’s best friends.  It really makes perfect sense.  But her Mom sure does seem to have a lot of BFF’s.

We made it up to Iowa for a Fourth Of July family reunion (Kit’s mom’s side) this year.  This trip was Molly’s first to Iowa and her first time to meet most of the Iowa side of the family.

The girls had a blast.  They met their first-cousin-once-removed, Jayvon, who was a boy but was close to Claire’s age and was lots of fun.  He and Claire really hit it off and spent lots of time playing tennis, basketball, and just goofing off during the boring family farm meeting at the hotel.  Molly tagged along some with them too.  I keept an eye on them, but Claire didn’t want me to hover too close.

The whole family got to ride in the (locally) famous Yale, Iowa 4th of July parade, which really was a heck of a parade for a tiny little farm town.  We set off daytime fireworks on the family farm.  We spent hours in the hotel’s indoor pool.  Molly was the lucky recipient of a swimming noodle with a head and tail.  We named it Hydra, and she spent hours riding it around the pool.  Hydra got silly and mad and tired.  I spent 95% of my attention making sure Molly didn’t drown herself, so I didn’t get to play much with Claire in the pool.  Luckily, Claire got to play with Jayvon and his dad, Scott, who had some really good ways to splash and toss the kids.

Here are some photos of the fun and patriotic weekend. 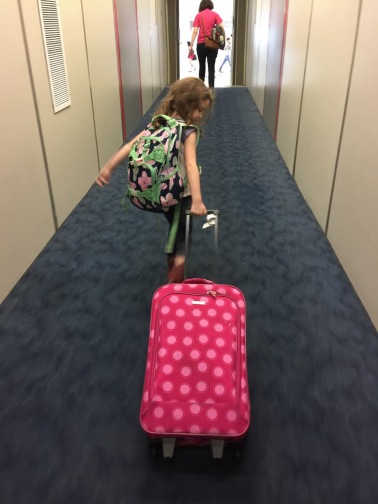 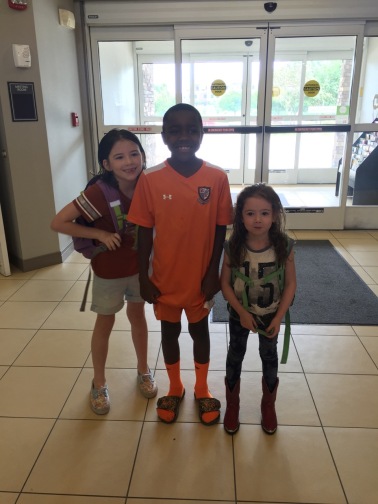 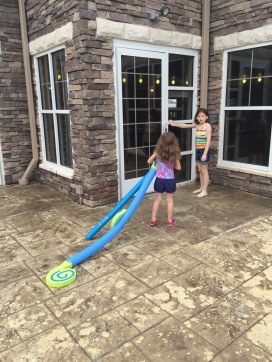 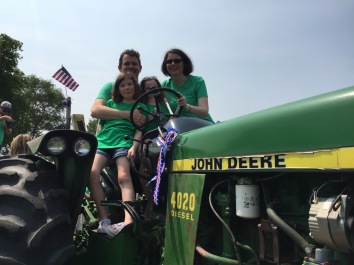 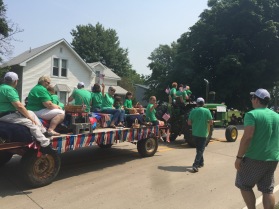 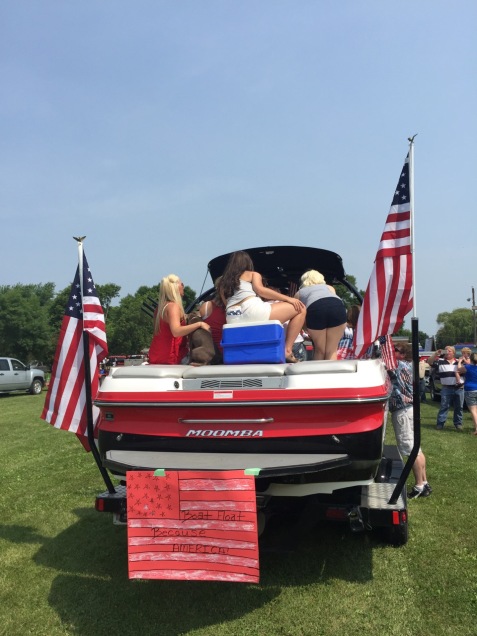 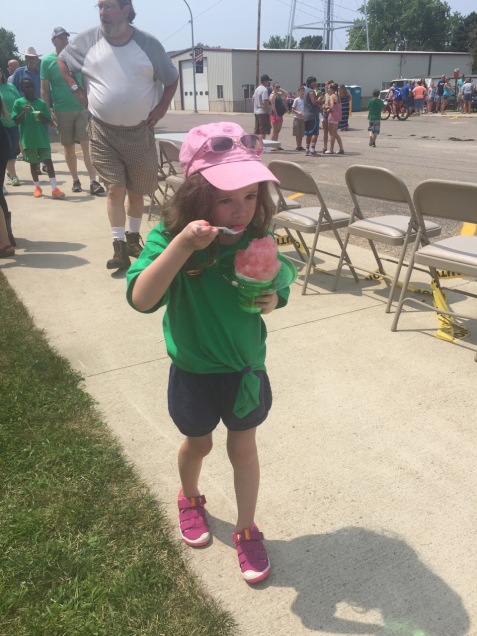 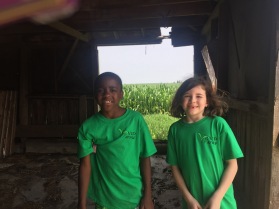 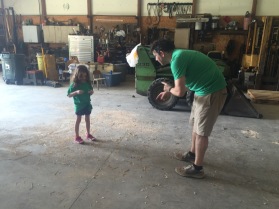 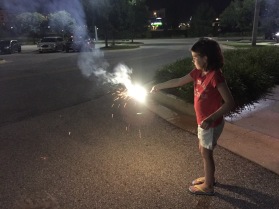 The girls’ nanny, Sarah, discovered a new app called Dubsmash that lets you lip-sync a small part of a song.  Claire and Molly each took a turn.  Sarah texted these awesome vids to us as a nice little distraction at work.

Claire – I Will Always Love You

Over dinner, when Kit is not yet home from the hospital, Claire and I often find ourselves playing different fictional characters that we just make up as we eat.  Molly does not really join in, but she does seem to enjoy the amateur performance.

Our favorite characters recently are a father (me) with a heavy Russian accent.  I am simply known as “Papa”.  I speak of my time back in fatherland Russia, where “if you want to eat, you do not go to grocery store.  No.  You chase down dinner and eat it.  Or maybe if you’re not so fast, it eat you.”  I have no idea where this comes from.

I tend to carry on about dinner.  “I work and work and make good dinner, and you turn up nose!”

Claire is Minka.   Minka is my daughter, but she is not Russian.  By her accent, she seems to be from South America or maybe Southern Asia.  She grew up in America and is spoiled by things like grocery stores and chicken nuggets.  Something is not quite right with Minka, who is afraid of televisions, iPads, or really anything electronic.  And she gets confused by forks and spoons.

Minka loves her dog, Cubbie (Muffin).  I adopted Cubbie back in the fatherland, where she helped me survive on the tundra by hunting down dinner with me every night.  Cubbie joined me on my trek to America and is always kind and patient with Minka.

Molly is Minka’s little sister.  We tried to include Molly in this story, but she does not want to join in.  We tried to name her Pepe, but she insisted that she is Molly.  Molly is “normal American kid who loves chicken nuggets and television”.

We’re not sure what happened to Minka’s mom.  She may be back in Russia fighting her way through the frozen tundra.  Or maybe she’s stuck at the hospital.  We’re not sure which is worse.