Skip to content
Good things happen when you have time off from work.  After taking a trip back to Corpus Christi and tackling countless piles of papers that have been building up for years, Kit has been able to relax a little bit this week. 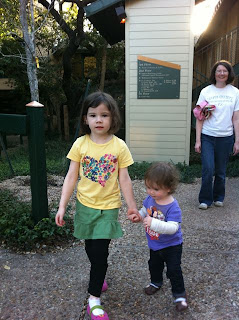 Kit and I both picked up the girls from school today, thanks to Kit’s week off and an early day off for me.  Claire loves those rare occasions when both Kit and I pick her up.  As an extra special treat, we got her a bit early, while she was still out on the playground.  Claire noted that we got her even before her friend Renee went home, which basically never happens.  Usually Claire and Molly are among the first to be dropped off at school and among the last to be picked up, and usually it’s just Dad doing the picking since Mom is off helping people at one of the hospitals around town.  So this was a really special occasion.
After we got Claire on the playground, we all went by to get Molly, who was also excited to see us.  Even though Molly is walking around now, I usually carry her back to the car, just out of habit.  But today Molly had other plans.  She grabbed Claire’s hand and nonverbally asked her to walk her out to the car.  It was a really good idea, and it worked nicely, as you can see below.
Then came dinner plans.  Usually we are worried about filling Molly up with food (todo link), but tonight Claire had that honor.   She had recently experienced a new bout of asthma, her first in almost a year, and she was prescribed a steroid to help her breathing.  These nasty steroids had caused Claire to feel (and act) really bad last time we used them, and apparently taking the medicine with as much food as possible helps lessen these negative side effects.  So we are filling her up with her favorite foods.  Last night it was pizza. Tonight we came up with hot dogs.  The pleasant early spring weather beckoned us to the Trailer Park Eatery where Claire could load up on hot dogs, Kit and I could enjoy the best tacos ever at Torchy’s, and Molly could sample from the rest of us.  Claire ended up spending most of her time playing a game of “freeze tag” with a little boy she met there.  She saw said boy, wearing a large inflatable guitar on his back, introduced herself, and got a game of freeze tag going on the large dirt driveway within two minutes.  Both kids stopped off at their respective picnic tables every now and again for a bite to eat and a sip of water, sort of like a pit stop.  Kit and I yelled “Car!” any time a car showed up on the scene, no matter how slowly and carefully it was traveling. Claire managed to get down two full hotdogs with ketchup, minus the buns, during this game.  The dogs seemed to keep the nasty steroid issued at bay (which was ostensibly the whole excuse reason for coming here to eat). 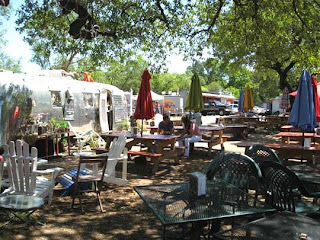 Molly, meanwhile, giggled and watched the scene while nibbling at Claire’s spare hotdog buns.  As it grew dark, Molly was captivated by the light balls hanging from the trees, which were colorful and bright and roughly the size of an adult’s head.  She kept pointing at them and saying “ball”.  Finally we found one that was low enough that we could lift her up to touch it.  She whacked away at the orb, sending it swinging above us, producing a big smile on her face.  Molly also got a brief chance to try to chase down Claire and her freeze-tag friend, which she took to with glee and some screaming.
Next week, Kit will be back to work and on call.  It will be back to boring dinner at home, possibly with Kit off at some hospital for some or all of the night.  But now that Kit has her full allotment of vacation this year, hopefully we will see more fun nights like this.